skip to main | skip to sidebar


June 4, 2014
We took it easy this morning as we waited for the traffic restrictions to expire on bridges we will encounter on the way to Portsmouth. We caught the 9AM lock through at the Great Bridge Lock. It was a short run from there to the Steel Bridge where we had to wait for the opening.


The wait at the Steel Bridge was nothing compared to what we experienced next. We arrived at the Gilmerton Bridge with 2 other sailboats only to find the #7 Norfolk & Southern railway bridge in a half closed position and maintenance personnel working on it. The Gilmerton Bridge operator suggested we contact N&S to find out when they would open for river traffic. Attempts to contact N&S via VHF were unsuccessful. After waiting almost a half hour, the Gilmerton operator called on the radio and said the N&S would be opening shortly. It took another twenty minutes before they raised the bridge to fully open. The Gilmerton operator opened immediately and we proceeded onward.


As we were approaching the Belt Line railroad bridge, we heard an announcement that it would be closing in approximately 15 minutes. I pushed the throttle to the limit in hopes we could beat the closing. We were almost to the bridge when I saw the large pulleys at the top of the towers start to rotate. We could not make it safely, so we did a quick 180 and idled back to sit and wait again.


The bridge lowered and the train appeared on the far shore. Instead of continuing on, the train stopped, someone got out and proceeded to walk across the bridge with the train slowly following. It seemed to take forever for the train to clear the bridge. A slow lift of the bridge followed and we were allowed to proceed, but only a short distance.


The next obstacle was an inbound cargo ship which we cleared by staying way right which really upset the Navy security boat at the ship yard. Clearing the ship yard, we then encountered a Navy Riverine group of 3 boats practicing for a demonstration at the upcoming Harborfest. Boy did those boats ever have the river churned up. Again we stayed way right and got by them.


The remaining quarter mile to our marina was uneventful except for a quick stop to chat with John and do a pumpout at the Portsmouth Boating Center.


No wind and no current made docking easy as we entered our slip. Lines were made fast, shore power connected and it was beer all around. We are home!
Posted by Dick & Donna Litchfield No comments:

June 3, 2014
We got an early start this morning even though we only plan on a thirty mile day. We departed the marina with a little current assistance, but it only lasted until we entered the Currituck Sound. We did manage some motor sailing which helped stabilize the boat as we quartered into some 2 foot waves. Add lots of fetch and the shallows of the Currituck and you get waves with a short period of 2 seconds and that ain’t comfortable. 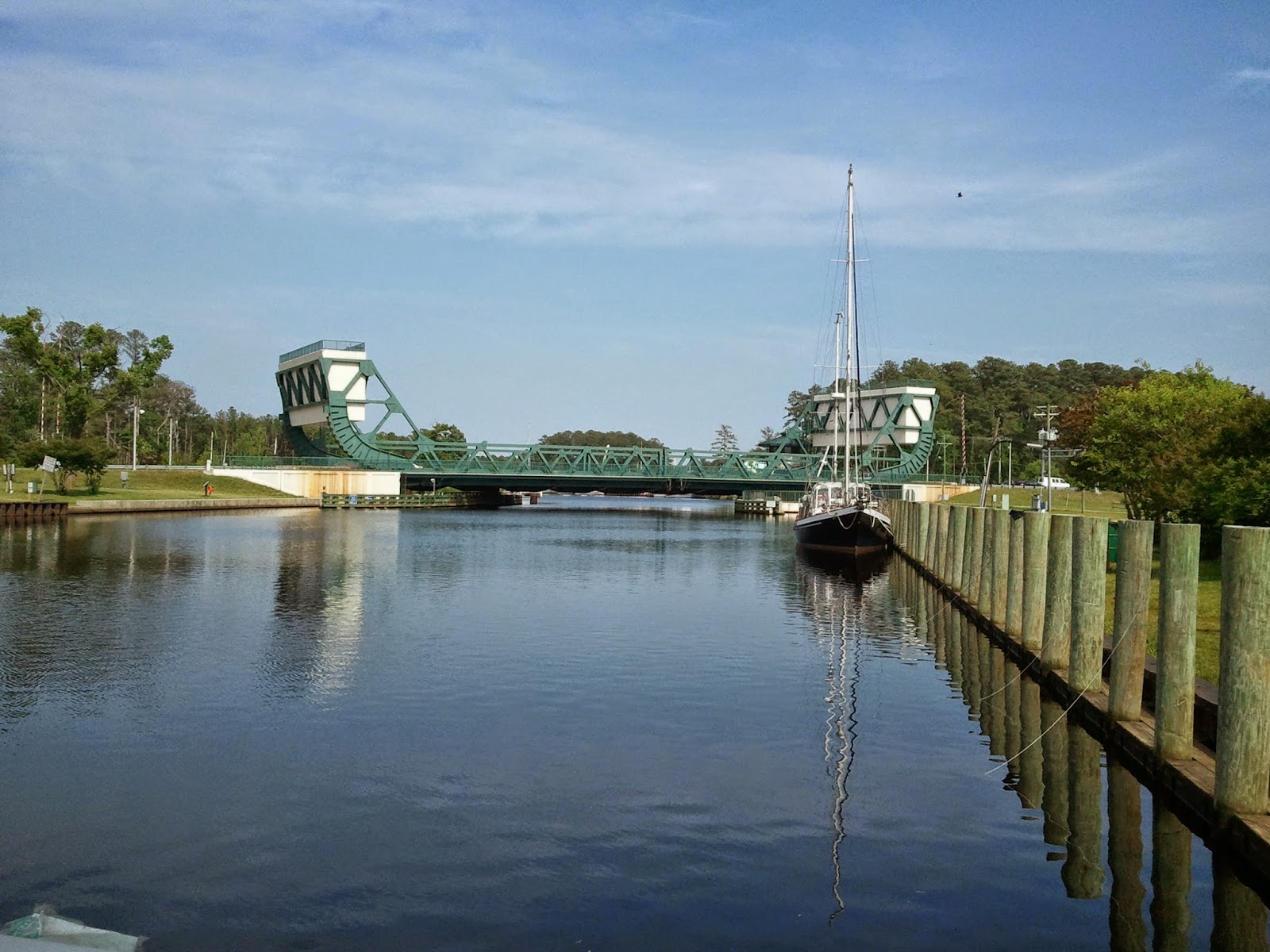 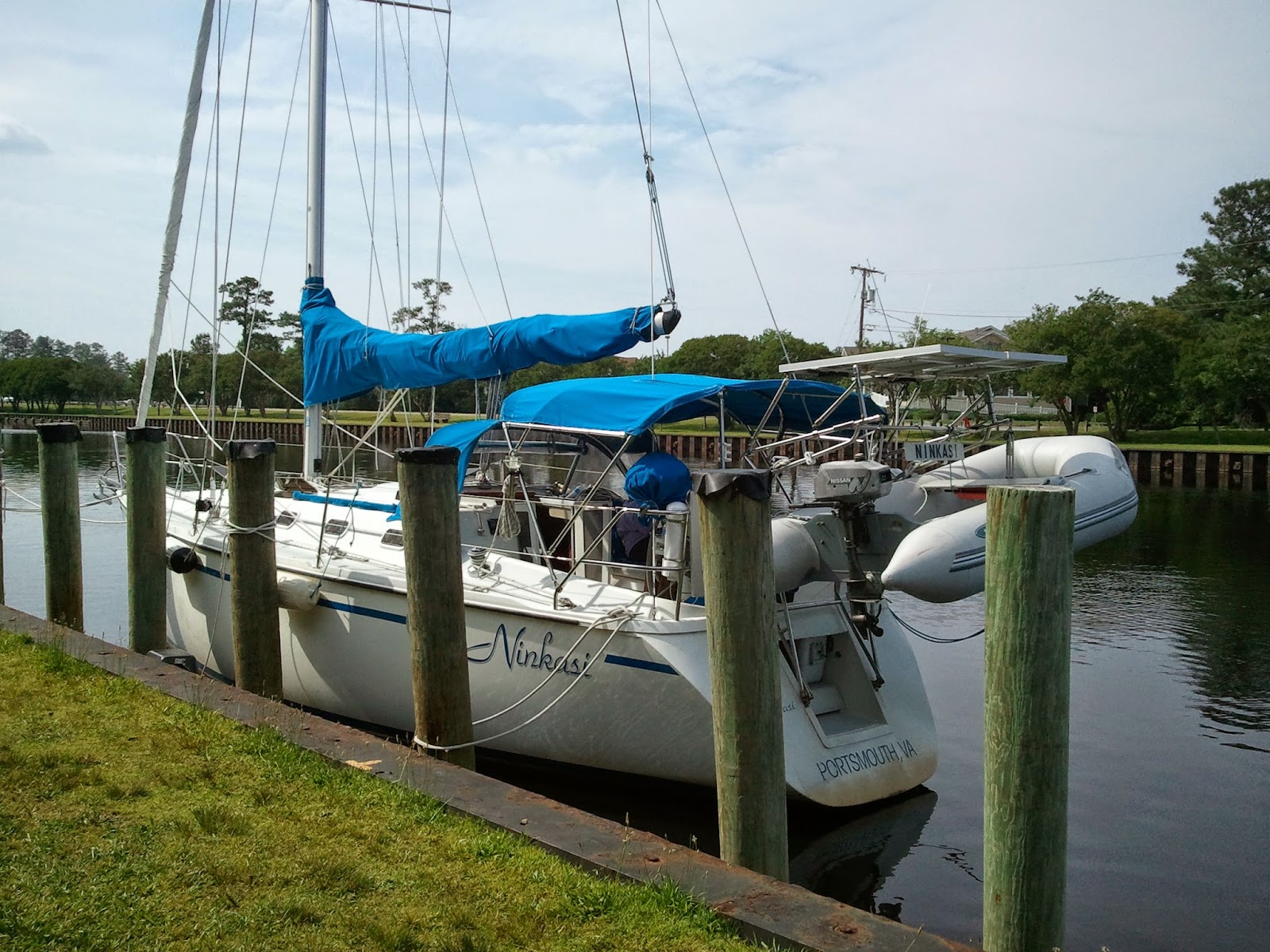 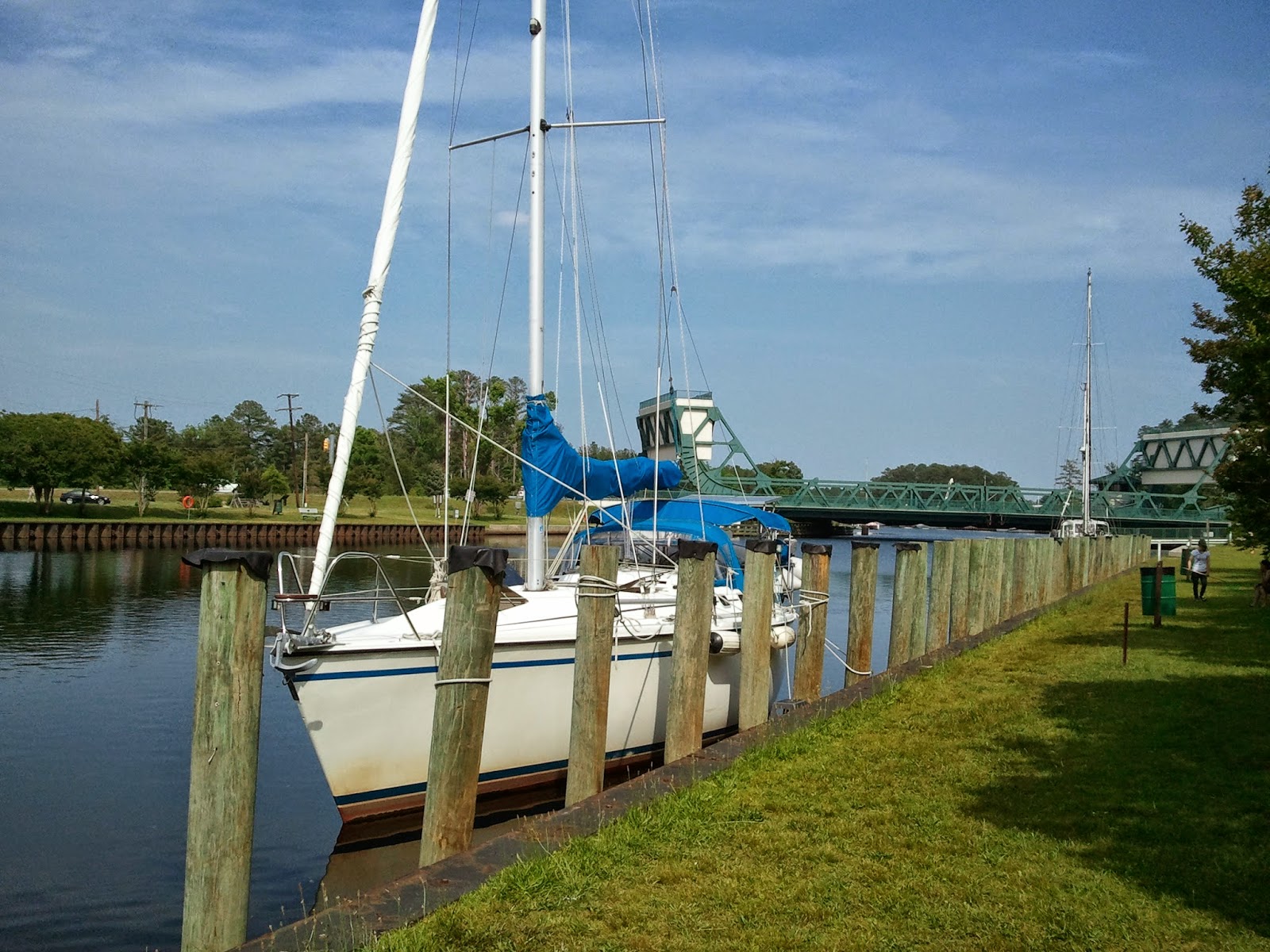 June 2, 2014
I am awake early. The winds are light and ENE. They are predicted to remain light, so all the cruisers are eager to get moving. We grab some coffee and get underway.

Out on the ICW, we push onward hoping the winds do not increase or switch back to the NE. If they do, it’s going to be a long bumpy day. The wind did shift back to the NE after we were about two-thirds across the Albemarle Sound. Thankfully, they remained light and we were able to slip into the North River without any difficulties.

We contacted Midway Marina and secured space on their face dock for the evening. We arrived shortly before 1PM and enjoyed the remainder of the day as downtime. Being Monday, Crabbie’s Restaurant was closed so we had to rough-it and prepare our own dinner, something we normally don’t do here.

Here’s an interesting sight from the Midway docks. 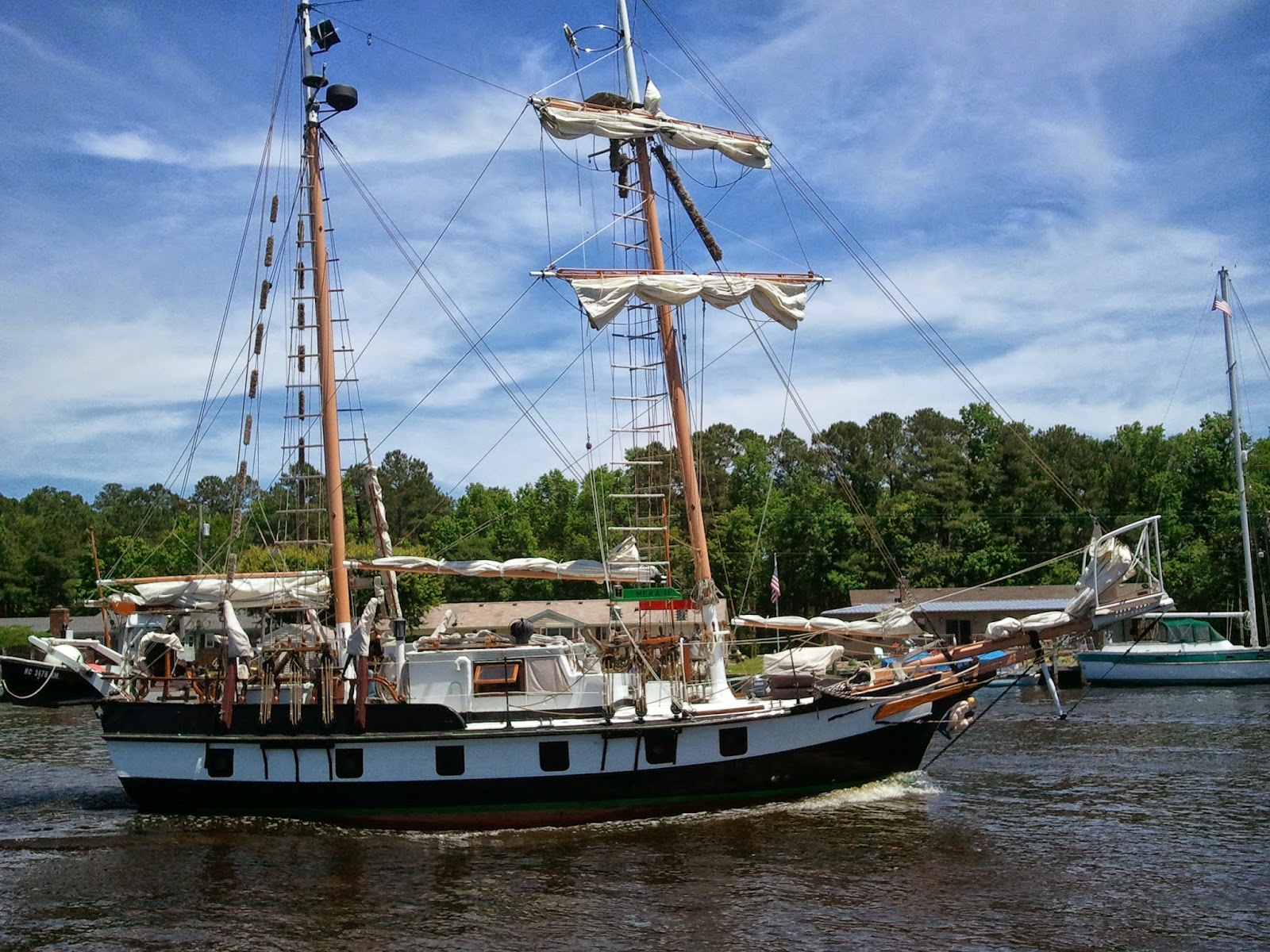 It was a short day, but we’re getting closer to home.

June 1, 2014
We got a late start from Dowry. The plan was to cruise about thirty some miles and anchor at the south end of the Alligator River. Today was not the day for plans to work out.


We had one exciting event coming through the Alligator-Pungo Canal. We sighted a pretty good sized black bear. He was near the water’s edge when he spotted us. He turned and raced up the bank and back in to some tall grass and trees. Boy could he move. Don’t think I could out run one of these guys.


The wind never made the forecasted shift so we had wind on the nose in the canal. Actually we had two foot roller waves meeting us head on the last couple of miles in the canal. When we exited the canal, it was immediately apparent that we were not going to use any of the several anchorages there. Anchoring meant we would have endured a miserable night on the hook so we continued up the Alligator River toward the marina just on the north side of the bridge. Phone service is almost non-existent in the area so we waited until we were almost there to contact the marina. Fortunately, they had space for us.

When we arrived, we met several other cruisers who had been at Dowry Creek the night before. We decided to do a group dinner at the little restaurant there. We dined and Miss Wanda (owner) stopped by to say hello and chat with us. The food was good, the company excellent and a good time was had by all.

We retired for the evening with cool temperatures, the wind still out of the NE, a forecast for light ENE winds in the morning. Hope the forecasters are better than the ones we had today.

May 31, 2014
We’re up early and already the northerly breeze is kicking up. Not what we want since we are traveling the Neuse and Pamlico Rivers today. Northerly winds make for a lumpy ride. The humidity and temperature is low and I am again wearing a sweatshirt and shorts.


We get to do some motor sailing and it helps our overall speed. As the morning wears on, the winds increase, waves build and our discomfort increases. As we reach the turning mark and enter the Bay River our sailing ends for a while. As the Bay River narrows and becomes enclosed by riverside forests, the waters calm until we cross the Pamlico River. It’s a bumpy ride across.


We reach the Pungo River and are near our destination, Dowry Creek Marina. We are running low on diesel in our main tank and I have emptied the jerry cans a couple of days ago. We arrive as the winds peak for the day. Cross winds at the fuel dock…fun, fun.


We dock portside to and are immediately pinned to the dock. We refuel, fill the jerry cans, and after four attempts manage to perform a pumpout. Then with the help of the staff, we were able to get away from the dock and move to a slip, again fighting a very strong cross wind.


We have just enough time to square away the boat before the usual Dowry Creek Happy Hour. There were about twenty boaters present and we had a thoroughly enjoyable experience.


Later we showered and retired to the boat for a restful evening.

May 30, 2014
We were up early and I contacted the Marine Range Control to make sure the ICW was not going to be closed due to live fire exercises. Assured there were no scheduled closures, we weighed anchor and was the second boat out of the anchorage. We passed through the Onslow Beach Bridge, the range and headed on toward Swansboro.


The weather turned cloudy, gray and much cooler. I even pulled out a sweatshirt and put it on. Later as light sprinkles set in, the sweatshirt felt even better under a light slicker.


We had planned to stop in Morehead City, but our early arrival caused us to revisit that decision. We decided to save the expense of a marina and continued on toward an anchorage in Cedar Creek.


We bucked a strong tidal current in Core Creek which really slowed our progress. Despite this, we arrived at the Cedar Creek anchorage around 1645. A houseboat and a trawler were already anchored. Later two more sailboats and another trawler joined the group.


We do have a new problem though. The mast head anchor light has decided to stop working. We will use the backup low hanging unit to make it home. No sense climbing the mast if we are just a few days from home.

May 29, 2014
We were up early and caught the first scheduled opening of the Wrightsville Bridge. We were able to ride the tide and made good time. Otherwise, the day was a typical ICW day. Leave early, run hard, drop the hook and call it a day.


We arrived at Mile Hammock Bay and were the first boat there. That was unusual. Sailboaters are usually the late arrivals. Trawlers and motor yachts typically get a late start, pass everybody and arrive at the destination first.


We were later joined by 2 more sailboats and 3 trawlers. We all experienced a calm night as the marines were not conducting maneuvers.

Dick & Donna Litchfield
Boating Experience: We have been sailing for about 40 years. It began in the seventies on my brother’s 18’ Windrose. In the eighties, we sailed on father-in-law’s 27’ Coronado. In 1995 we bought our first big boat, a 1981 Hunter 27. We sailed “Dream Catcher” all over the lower Chesapeake Bay for 10 years. In 2005 we purchased “Ninkasi”, a 1988 Hunter 33.5. We sailed her all over the lower Chesapeake until I retired in April 2007. We completed a month long cruise of the bay with crew member Buddy, our cat. We started seriously considering my dream of taking the AICW south to FL. In October 2007 we headed south via the AICW with two other boats. Being newbies it was great to have them lead the way. We arrived in Stuart, FL in November, stayed all winter and had a blast. In April 2008 we started our solo trip home. Another wonderful time. Condo remodeling and shoulder surgery prevented a repeat in 2008-09. This year, we plan to head south again, spend some time in Stuart, cruise to the Keys and up the West Coast of FL before we do a U-ie and head back for home. Unfortunately our favorite mate Buddy passed last year. He will be sorely missed. Here’s hoping “the plan” works!